Shivers is not just any service dog, he’s my service dog and I am his handler. It has taken a lot of growth to have the courage to begin to bring Shivers with me into the public. I have gone from investigative and closeted about my need for him, to knowledgable and confident to have him with me when and where I need him.

This weekend, in route to the remote desert near Joshua Tree, I realized his service vest was still in my hiking pack from the weekend adventure before. No turning back, I realized I had to get a bit more confident. His only ‘legit’ ADA compliance would be his behavior and my knowledge. His behavior being the one and only requirement per law, it was up to me to handle the situations we would encounter with those who would treat him as is a pet.

The policies of the event were clearly posted “no doggies”. I had already called ahead to let the campground know he would accompany me, and the manager there advised me to remind all who opposed that he was allowed with me by federal law.

Bringing a service animal into public isn’t as easy at it looks. My dog’s behavior is exemplary, yet, people bring an added element to our team work. For example, he is adorable and quite irresistible and he finds children just as charming as they find him. This is excellent, except it draws attention to us.

Some people think that service animals for those not visibly disabled is an attention getting process. Visible disabilities are socially acceptable and accommodated for. There are wheel chair ramps everywhere, and no one is going to question a blind or deaf person’s disability. People suffering from mental illness don’t look disabled or sick.

Mental illness disabilities require another realm of understanding; one that is non judgmental and kind. Understanding that anxiety can cripple a person in an instant may take experience, or at least a bit of education.

Shivers goes with me everywhere. He isn’t a purse dog, and he isn’t a golden retriever; he rarely wears costumes, and waits for my commands to pause at street lights rather than lead me as a seeing eye dog would. He doesn’t turn on lights for me, or fetch prescriptions for medical reasons. He does, however alert me when a stranger approaches our home, (or tent when camping). His body language tells me everything that is going on; a low growl indicates someone is approaching. He barks when someone is at the door, or has approached. He stops barking when I acknowledge I have the situation under control.

I don’t always have the situation under control. Sometimes I need the appearance of a distraction in order to avoid a panic attack. This is when our team work goes into action. At a signal, Shivers will appear to demand my attention. I say “appear” because that is all it is. He comes to me and paws my leg repeatedly, or begins licking me over and over if he is in my lap. This gives me the opportunity to take a moment away from the people around me who are often demanding more attention from me than I can give.

Shivers also reacts to my tension. I can tell when I’ve hit a mental state that I am not aware of when he begins to react. I am able to divert my energy from distress, to him and I come away from the moment less exhausted than if I hadn’t. It is much simpler to calm a dog than a full blown panic attack.

Saturday afternoon, at the music festival, Shivers and I were having a drink and sharing a pulled pork wrap from an amazing vendor at the festival. The day was cooling off and the tempo of the night was setting in as the sun dipped below the horizon. Shivers was tired and was about 30 mins from being tucked into bed. Regardless my mental state, when he works all day, he has needs too.

The approach of a security guard is one of the most awkward moments in the life of a service dog handler. Here comes a person of authority, a person who knows they are in charge, a person who may or may not know the law about service animals. This person’s knowledge can make the situation quick and painless, or potentially put a dent in my psyche that my energy is zapped in such a way, my course of enjoyment is altered.

Some people in my life have preferred to hide the dog, or smuggle him into places, quickly complying when asked to leave. In the beginning, I just coped with these ideas, knowing inside that it wasn’t working for anyone. This required me to take a step up in confidence and make the situation right, regardless of the potential threat of unknowledgable authority figures.

The ignorance involved in knowing an ambiguous law such as the ADA Service Animal laws can manifest itself in various ways. There is the hesitant nice person waiting to hear the “secret code”… I only need to say, “this is a service dog” and they say thank you and walk away. Then there are those who don’t know, but just need told a couple details of the federal law. Typically these folks are curious and talkative than the others, but they still walk away without a scene. Then there are those who don’t know, don’t care and need to check with their supervisor and just want you to go away.

These ignorant people hover while they make their phone calls as if I have just pocketed their merchandise. At this point it is up to me how far I want to push the issue. If it is easy to simply walk out and let them loose my business, I simply leave. But this weekend I paid over $100 to attend the event I was enjoying and when the security guard approached me I knew I had to stand my ground.

The waiting for them to call security is the most uncomfortable. My anxiety level hovers until they come back. Shivers will stay close and watch too, he knows something is up though. Then comes the verdict. Last night the guy wanted the “official papers” to prove he was a service dog. There simply are not any official papers available from the state or federal government, I checked and had there been I would have already gladly acquired them. There are services you can buy; they print you an official-looking card and you give them $200. But, to ask for papers to access a facility is against the law. Asking for specifics about my need for a service animal is a violation of federal law.

The security guard didn’t seem to believe me and began to make statements that were not fact based. Feeling his authority strongly, with the backing of his supervisor, he told me that he had the right to refuse service to me. This was the first time I had been treated like this and as I began to feel emotional I turned to other authority figures around until I was taken the head of security. They called them the “men in black”. I was on the edge of tears while I quickly explained the problem. The man in black first told me to tell the guy it was against the law, but I had already tried that so he escorted me personally to the entrance. There is comfort in being escorted by someone who has heavy authority. He collaborated with the head nurse volunteer station and issued me a permission slip for Shivers to stay.

Of course I was relieved, they had fixed the problem, but it took so much energy. Emotional energy is valuable, especially to someone who easily slips into depression fatigue or panic attacks, as the emotional energy isn’t fueled up to begin with. After such a lengthy ordeal, all I could do was collapse to the ground and hold on to Shivers while I re-centered and connected back to the vibes of the festival.

But, it was difficult. The sun was close to setting and I had wanted to take pictures in that photographers-paradise of sunset. We had only 10 minutes of light remaining by the time I got my permission slip.

Anxiety often causes me to shut down completely. I usually get a sense of overwhelming thoughts and have to deal with the discussion going on in my brain. All other activities seem to be existing as if in a dream in which I am an observer. So, after I realized the time I lost at the festival, dealing with someone who was ignorant of the law, I shut down. I tried to get myself into the music, the reason I came, but it wasn’t happening. I was completely disconnected and thrown off into another realm of consciousness.

All this could have been avoided if the security guard had knowledge of the laws before he began to practice his authority. Some might say it could have been avoided if I just followed the rules and left my dog at home. One bystander thought it was useful to remind me that there are signs everywhere that said “NO dogs”. She said this as I was fighting back tears before I got to see the man in black. I surprised myself to have the strength to tell her firmly to mind her own business.

Why she thought it was a good idea to tell a crying stranger something so rude is beyond me. However, I shocked myself at the confidence that I exhibited when responding to her. Another time, at the beginning, I would have given more energy to her to explain, but I simply don’t have the time. Some handlers use the practice of printing informative hand bills for such situations. Perhaps in another life I will have the chance to be so creative.

I have a need and as long as no one interferes or impedes my path, I can get through my day autonomously. If I didn’t have my dog, my life wouldn’t be the same. I would likely be unable to function in many respects, and would be on more medication than I am on now.

I decided to start this blog to share the part of my path that includes Shivers and me as a team to bring awareness to mental illness needs in the public sphere. I hope you, as a reader, can share my experiences, bring in your own and spread the positive vibes in support of mental illness awareness. 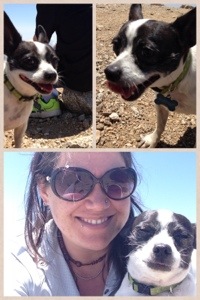 Working on making the world a better place, starting with the woman in the mirror.

First backpacking trip of the year! Always having fun with you @wolfgangvanwyk 🥰
Had so much fun today cruzin the streets of Riverside. Look out world here he comes! 🥰
My love 🥰🥰🥰
Happy Thanksgiving! I send gratitude to the universe for bringing this cutie into my life. Thanksgiving #2 is a wrap and now on to our second winter holiday season.

Adventures and experiments in two-wheeled travel

Single parenting in the ADHD Family

Thoughts and ramblings of a young adult